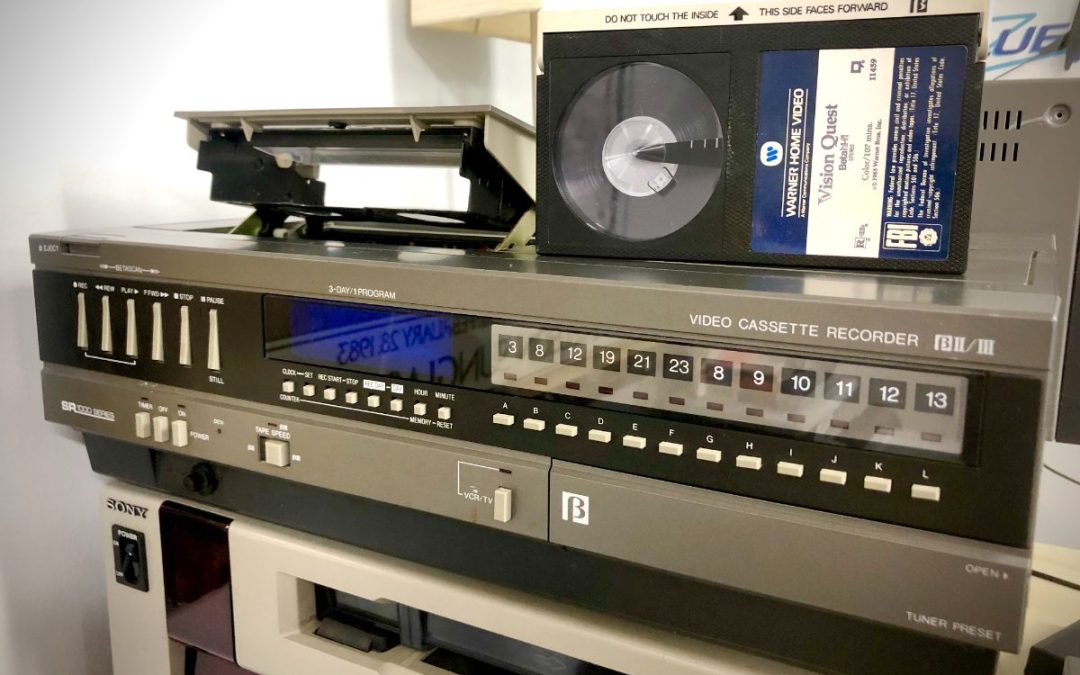 Not as exciting as Ali vs. Frazier in the mid 70’s but interesting nonetheless! Sony’s Betamax hit the Towson streets (and elsewhere of course) in late 1975 and JVC’s VHS format arrived in the fall of 1976. Wow, two revolutionary home recording formats were released about a year apart. It is old now, but what a technological explosion at the time! So let’s ring the bell and see how this fight for control in our Towson neighborhood home recordings played out on the store shelves!

Beta scored early by hitting the market first and generally was considered to have slightly better video and audio quality. The cassettes and machines were more sturdy. VHS countered with what could have been a knock-out blow…the recording time! Beta was limited to 1 hour of recording and soon had 2 hours of recording in a slow play mode. VHS was ready to go with 2 hours standard and could go to 4 and even 6 hours in LP and SLP modes respectively. I honestly don’t know how the marketing and price points played out at the time as I was busy trying to get through second and third grade math. But needless to say, you were not getting your Beta tapes at Blockbuster, VHS was the clear winner!

Beta hung on for a bit, with recorders being sold as late as 2002, and tapes were sold all the way through 2016 (Really, 2016?!). I had the recent pleasure of trading some transfer services to a friend here in Towson for a “like new” Beta deck. She is a beaut…and weighs about a ton (the deck, not my friend)! I’ll be hiding under it if a tornado tries to roll through. The moment of truth approached as I fired it up and inserted a beta movie I snagged at a yard sale a few years ago. And after adjusting the tracking (remember tracking?!), there was Luden Swain running across the bridge to the song “Only the Young” by Journey in the opening of my favorite movie “VisionQuest”. What a sight! Played like a champ…(spoiler alert) just like Lauden. So if you happen to have some old Beta recordings you need converted to digital, let’s talk!